Disclosure: This post contains affiliate links and I may receive a commission if you visit a link and buy something on my recommendation. Purchasing via an affiliate link doesn’t cost you any extra, and I only recommend products and services I trust. All opinions are my own. Thank you for supporting my work!

Histograms have made their place in every image editing software these days, and to master photography, you need to try understanding photography histograms.

They are a part of most present-day digital cameras, and some of the compacts can display them. So the meaning of such persistent inclusion suggests that histograms are very important.

So if you are a beginner photographer and don’t understand what these graphs represent, you have come to the right place. Remember, there is nothing to be ashamed of because you will become proficient at them after reading this article.

They might appear complex at first, but to be honest, they are not. And hopefully, you will agree with me by the end of this tutorial, as I will teach everything about the histogram in simple terms; from how to “read” them to how useful they are for photographic needs, everything will be covered.

So let us begin:

A histogram graphically represents the tonal values of your photo. In simple words, it reflects the number of tones of particular brightness that are part of your photograph, which can range from 0% brightness(black) to 100% brightness (white).

In a typical histogram, the dark tones are displayed on the left side, and if you move toward the right, the tones get lighter. In the middle of the histogram are the mid-tones, which don’t fall in the dark nor light category.

The histogram’s vertical axis refers to the number of tones of that particular lightness, and the histogram itself is exposure-dependent. It is also influenced by other factors such as tone curves and other settings.

When a portion of the histogram “touches” either of the edges, it indicates a loss of detail, also known as clipping.

In both cases, you can fix it by altering exposure settings.

If you want to view the clipping in your photograph, then engage the histogram in your camera when reviewing images.

Each camera has a different reviewing option. For example, in Nikon cameras, you have to press the navigator keys down or up a couple of times when in review modes so that the correct settings can come up.

The majority of current DSLR cameras come with live histograms that react with the scene in real-time. So if you want a live histogram, you have to use the LCD screen of your camera instead of the optical viewfinder to photograph in Live View mode.

If you notice any shadow clipping or highlight, then immediately alter your exposure accordingly.

You can set this Exposure compensation in most cameras through the “+/-” button. If you are shooting in manual mode, you will have to alter ISO, shutter speed, or aperture accordingly.

Most histograms only display information of 3 primary colors; green, red, and blue. That is why they are called RGB histograms.

You must have noticed that histograms consist of several diagrams that are marked with different colors. So 3 of the diagrams in a histogram represent green, red, and blue color channels.

Photographers can perceive histograms as graphical representations of exposure, and many of them do use it to evaluate whether the exposure based on histograms alone is “good” or “bad.”

They do this by reading the histograms as a “good” histogram renders most tones in its middle portion, and only minimum tones are found at the edges.

While a “bad” histogram mostly has tones at the edge, which means that either there is underexposure leading to shadow clipping or overexposure, leading to highlight clipping. It can even lead to both in a single photo.

Here are some examples to further explain the link between histogram and exposure:

When you look at an underexposed image, it is too dark and lacks bright detail.

This is also represented in the Histogram as it clearly shows a shift to the left side as most of the tones fall in the shadow range, and you will even find some clipped (completely black) areas.

When you look at an overexposed image, it is too light. Most of the tones are very bright, and you will normally find no darker tones.

The majority of the image portion is completely white and is blown-out, bearing no detail at all. This is confirmed by the histogram, as it clearly shows a strong shift to the right.

In a well-exposed image, the brightness is perfect, and there are neither too dark, not too light areas. So in a histogram, it is represented by a much broader tone distribution, and most of these are found in the “mid-tone” section.

There will be barely any tones at the extreme right or left side of the histogram, which will mean that no detail is lost in shadows nor any is blown out. 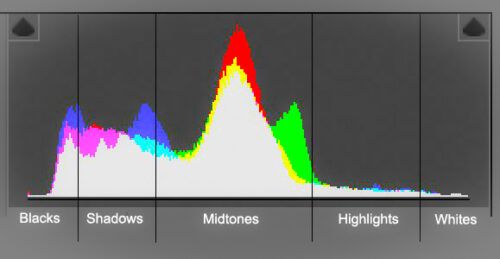 Can you use histograms to Set Exposure?

Based on the above examples, a “good” histogram will have tones stored in the middle portion, representing correct exposure.

But this doesn’t work every time; that is why histograms can never be completely effective for judging exposure. A simple conclusion which we have reached is that for overexposure and underexposure, histograms are good as they can discover whether the image is clipped or shadowed.

But for evaluating correct exposure, they are not so good as well-exposed image depends on too many factors, other than tones such as your vision and the scene you are capturing.

As histogram can merely show the number of tones of various brightness levels, the verdict is not sufficient to determine exposure. It can act as a guide to avoid loss of detail when capturing images, as it excels in it but nothing more.

Learning how to evaluate a histogram can be invaluable, but this doesn’t mean that you have to make a habit of glancing at a histogram after each shot.

It should only be used to check the under and overtones. Hopefully, after reading this article, you will understand how to use them and apply them in real life.

With practice, I am sure that you will be able to read them without a hitch and, with their help, create some extraordinary images.

In love with Photography!