Disclosure: This post contains affiliate links and I may receive a commission if you visit a link and buy something on my recommendation. Purchasing via an affiliate link doesn’t cost you any extra, and I only recommend products and services I trust. All opinions are my own. Thank you for supporting my work!

Some people prefer simple cameras over complex ones. Those who pay no attention to the camera’s advanced features, whose sole purpose is only to take pictures, or whose desire is to own one without spending a fortune. If you are that person, worry no more because Nikon Coolpix L340 Camera is what you are looking for.

Coolpix L340 is smaller, lighter, and cheaper than a DSLR camera, though it is not capable of low light photography, wide-ranging landscapes, or extremely close shots. However, it gives a better zoom range than smartphones and other compact cameras can offer.

Its control range is comparable to the primary point-and-shoot sniper though its physical feature looks like that bridge camera. Released during the 11th day of February 2015, it stands as a replacement for L330. 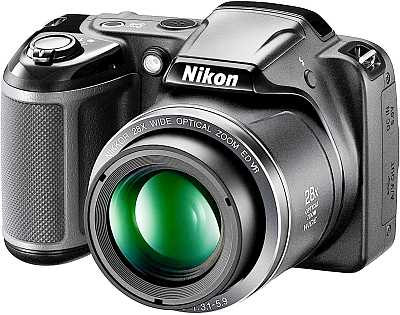 Take and collect HD pictures and videos using Nikon Coolpix L340, a compact digital camera for starters, and those whose photography is just a hobby. Considerably, a budget-friendly camera with a price far cheaper than the others. Its command is supported by different languages, approximately 34 in all.

The camera body is made of plastic with a prominent built-in lens, meaning it is fixed and cannot be changed. It has a size just like any pocketable compact camera with an extra texture grip for comfortable yet secured handling.

On the back of the camera is a small thumb rest, which helps the camera fit the user’s hand. Along with its weight of 430 g, L340 is a light camera considering that battery and SD cards are already installed. Its compartment is the underside of the camera.

When setting it up for the first time, information such as time and date are needed before the actual usage. Supplied accessories included are four pieces LR6/L40 (AA-size) alkaline batteries, Lens Cap LC-CP25 (with cord), USB Cable UC-E16, and Camera Strap.

Customizing your image without using computer-based editing software is highly possible because the camera can trim videos and apply the effects itself. Apart from digital effects and a scene detecting automatic mode, another wonderful feature of L340 is the Smart Portrait Mode.

This model portrays a favorable photographic view of the subject by softening its skin. Another plausible feature of Smart Portrait Mode is that it sends warnings upon taking the shot if someone blinks.

Sharing your files is possible through cable connectors. It has a USB port for transferring images but doesn’t have either Wi-Fi or Bluetooth connectivity.

Unlike those high-end bridge cameras, Nikon Coolpix L340 does not have too many buttons to be acquainted with but only important ones like self-timer, scene modes, macro mode, video recording, and flash mode.

Zooming, framing, shooting, and video recording are more stable because Coolpix L340 is not cramped with so many buttons. The on and off switch is on top of the camera along with the shutter release button, camera’s microphone, and flash. 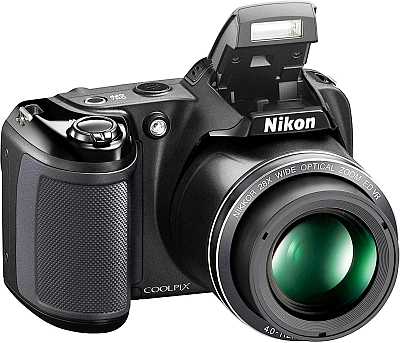 Besides the flash is a button for the pop-up flash, and for the flash to be switch off, the button must be pushed back. Pop-up flash has four different settings. Those are Auto, Auto with red-eye reduction, Fill-flash, and Slow sync.  For zooming and widening, the switch is near the shutter release marking as ‘T’ for zoom and ‘W’ for wide.

Meanwhile, at the back of the camera in the upper right corner of the LCD, is a button for video recording. Going downward is another button marked with “SCENE.” Different shooting modes will be displayed as you press it, following what the camera model offers.

If you don’t have any idea concerning the most appropriate scene settings for you, leave the Auto Scene Selector’s decision.  If you want to change the layout, there’s the scene selection. There are three remaining buttons situated to the “SCENE” buttons.

Those are the playback button (horizontal), the Menu button (vertical), and the delete button (slant). They surrounded the navigational pad, which has four directional keys with an OK button at the center. Its function is to access self-timer (left), alter exposure compensation (right), flash modes (up), and macro focusing (down).

The last mode known as “AUTO” controls the shooting settings such as White Balance, ISO Sensitivity, and AF Area mode, but before choosing, enter the main menu first. There are some things to be considered. However, it is impossible to alter the aperture, shutter speed, and autofocus point. Also, the image format is only in JPEG.

L340 is externally identical to its predecessor, the L330, sharing the same 20.2MP ½.3 inch CCD sensor capable of maximum sensitivity of just ISO 1600, yet reaching ISO 1600 degrades the quality of the image.

The only notable difference between L340 and L330 is the increased zoom range. While the older version had 26x optic, Coolpix L340 upgraded into 28x optical zoom lens, and Coolpix cameras have Nikkor glass lenses, which many photographers prefer. 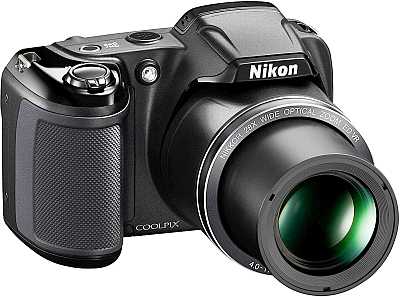 This optic can zoom farther, take crystal clear close-ups, and offer more vibrant photos and HD videos. Thankfully, Nikon retains the part despite the update. Its upgraded version enhanced the camera’s digital zoom function to the point that it doubles the telephoto reach up to 56x Dynamic Fine Zone. It captures either detailed close-ups or far away action with a 35 mm-equivalent focal range of 22.5-630 mm full-frame equivalent filled with a view.

Manufacturers also added the lens with lens-shift vibration reduction so that every time the camera takes shots, its shaking effect is minimized. It keeps the photos sharp and steadying the video as long as the middle-range ISO speeds (400-800) are not in low light.

Please take notice that every time you zoom in, its lens aperture (f/3.1-5.9) closes. As a result, available light becomes dimmer.

To take pictures without a viewfinder is pretty annoying, but the 3 inches screen helps view the included area that needs to be captured clearly and brightly. It has 460k-dot and TFT LCD with anti-reflection coating and 5-level brightness adjustment, reproducing acceptable color and brightness, resulting in satisfactory viewing though its angle is only limited. 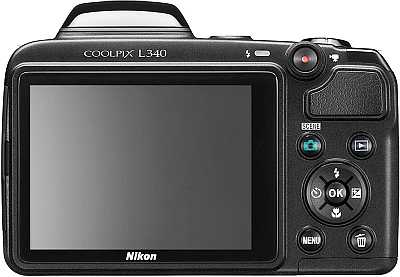 Brighter sunlight produces better quality, nicer saturation, and more animated color pictures. Also, autofocusing speed is more responsive if the target of focus is in a nearby distance. The macro mode must be around 1 cm to 5 cm for the proper lock on.

Lacking sharp outlines or losing the linear form is due to zooming the image size greater than 50% of the actual size. Taking shots under tungsten and fluorescent lighting resulted in a plausible performance of Auto White Balance.

Though captured at HD, video resolution is at its best at 720p at 30 frames per second with mono sound. Taking it to 1080p HD distorts the video.  If you want to add filter effects, choose within Nostalgia sepia, High contrast monochrome, Selective color with 12 color options, Pop photo illustration, or Cyanotype.

It also has 16 scene modes like Beach, Snow, Sunset, Night Portrait, and many more. Moreover, ISO 80 and 100 give a fairly clean image. Just don’t increase the ISO if you don’t want to have the aftermath of blotchiness and color speaking, not to mention the high grain level.

Although L340 has ISO 1600, but it looks terrible. On the other hand, there’s no need to worry concerning image twisting or alteration caused by the camera lens because Nikon’s JPEG image processing corrects it.

Nikon Coolpix L340 Camera doesn’t have a rechargeable battery pack, so its source of power comes from four AA-size batteries that can be brought in convenience stores. Alkaline batteries can take approximately 370 shots or last within 2 hours and 5 minutes, while EN-MH2 batteries are capable of 600 shots or a time limit of 3 hours and 40 minutes.

Lastly, the Lithium batteries, which can take 960 shots maximum, last longest upon usage—5 hours and 40 minutes in particular. But if you find using traditional batteries a hassle, you can buy a rechargeable battery for yourself like Panasonic Eneloop.

Nikon Coolpix L340 is a consumer-friendly camera for its price and its easiness to use. However, there are many restrictions with its usage in contrast to other cameras that have advanced features, but what can we expect from a camera at an economical price?

As a quite basic model, it is not a surprise that the Nikon Coolpix L340 Camera offers only a few features; nevertheless, it saves others from the confusion and complexity that high-end bridge digital cameras bring. Also, because of its plastic body and pocketable size, you can bring it wherever you go.

Its image resolution is considerable for a non-professional user. Just keep in mind that there are certain conditions to be considered to achieve those acceptable pictures. This camera is recommendable for ordinary purposes and is preferable for brighter lightings or outdoor activities. 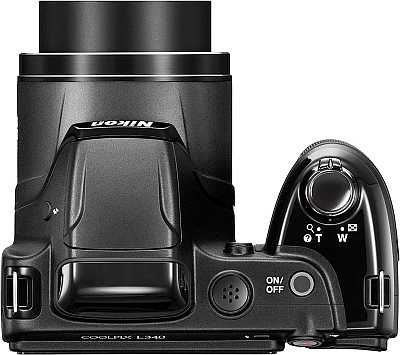 Having a rechargeable camera that only had a traditional battery as a package isn’t that bad, especially if you suddenly run out of power—for getting your charger or can’t access a plug socket. After all, convenience stores are just around the corner.

On the other hand, if you’re that individual who is looking for wireless connectivity, resolution of 1080p HD full, clear image even on gloomy days, this camera is not for you.

Hassle-free, comfortable, versatility, and budget-friendly price <-Affiliate link 🙂 are some of the reasons why Nikon Coolpix L340 is still hot in the market. It gives you the utmost value for your money. Thus, if your sole purpose is only to captive pictures and videos during vacations or a simple get-together, this camera is your decent option.

In love with Photography!